Patty’s still working on the guest bathroom.  Now she is completing the finish plumbing.  She connected the sink, toilet, and shower at this point, all with the help of YouTube.  The claw-foot bathtub remains to be connected.  She continues to impress!

This afternoon Patty and I jumped in Thumper to take a dozen eggs to John and Janet, one of our three egg customers.  We sell  eggs for $4 a dozen or 18 for $5.  These are organic, gluten, free, no GMO’s, free range chickens.  That’s how we promote them. Watch out for those salient words, especially organic.  It’s over-used, and questionable as to truly being organic.

John and Janet live about a mile from us on the side of a beautiful canyon on 80 acres. It seems like their views go on forever.  They’ve lived their many years, but are thinking of moving into Sutter Creek. John is 81 years old, and while in good shape, he’s ready to be closer into a town, and not have all the work it takes to keep a place like his up.  He just put his home up for sale yesterday for $1mm.

We hung out with them for probably close to two hours.  They have a very comfortable patio, and with mild temps and a gentle breeze blowing, it was easy to stay awhile.

Later, we took a tour of their beautiful vegetable garden.  They gave us some tomatoes, squash and zucchini.   They also have quite a variety of nut and fruit trees.  Pictured is a Chestnut  tree. 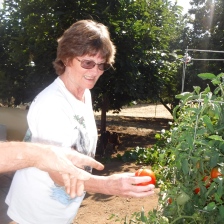 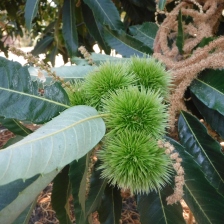 We got back home in the afternoon, and just did some straightening up and gathering of a few things for the dump.  If you get a little dirt under you, it’s easy to have stuff here and there.  You don’t notice it so much when it’s spread out over an acre and a half, that is until it’s time to clean up.  I’ve made two dump runs lately and I’ve started loading the truck for the third.

I made dinner for Patty and I tonight.  We had chicken burritos, with about five different types of peppers included.  It was pretty good, even if I say so myself.  Patty turned on an original Cinemax TV series show called “Quarry”.

We only have internet TV.  I took a seven-day free trial of Cinemax recently.  I started watching a few of these Quarry shows during the trial period, and I’ve been subscribing to Cinemax for the past two months since at $10 a month.

I mentioned we also subscribe to CBS, which provides us a local channel out of the Sacramento Valley.  That one costs $5 a month.  Our total TV bill is $15 a month presently. This may change in the near future.  It’s a bit much for TV.

We used to have satellite TV, but we cancelled it close to three years ago.  They wanted $80 a month for the basic channels.  We both can’t see paying that for TV.  Once you wean yourself from cable or satellite, you won’t miss it.

I wake up almost daily anywhere from 2:00am to 4:00am.  This is why I fell asleep about 8:00pm.  I’ve still only seen the first two episodes.  I’ve slept through six of the last eight episodes we’ve had on.