6:00am – Wow, I slept ten-hours!  Got up to work on this story, and had nothing but problems downloading pictures, causing many hours of work, and lots of frustration, but we move on, and keep trying.

Patty brought her sewing machine and shipping supplies to fulfill her pillow orders.  She put together the pillows here, and got them ready to ship.  We expect we’ll find a post office on the base somewhere. 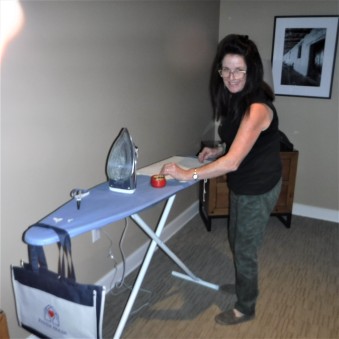 11:00am – Took the twelve steps from our room to the dining room, where we were treated to a Mexican meal provided by a restaurant called “Rubio’s.

Captain Sully appeared as the guest speaker.  He provided an inspiring talk, and we had the honor to meet him and his wife.  We got photo bombed by another resident, but Patty was able to edit her out with “Corel Draw”graphic software.  It was a great experience!

2:20pm – We walked a short distance to the hospital for our second treatment.  Patty took some pictures of the procedure, and some from the control room.  I took a Bud Light pain pill an hour beforehand to lessen the pain on the table/bed this time.  It helped. Later we left the base to pick up a couple of things at Grocery Outlet.  We brought back a cherry pie to share with the house.  I saw a little girl look lovingly at a stuffed animal, and instead of bothering her Mother about it, she put it back.

I walked over to her and asked, “do you like that animal”?  She said she did, so I bought it for her.  She came up to me and Patty as we were checking out, and thanked me.  Cute. 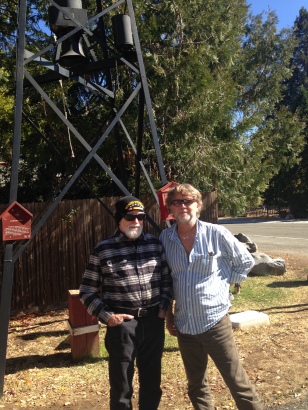 I was talking with Al my good friend, who’s also fighting cancer, when another call came in.  Hearing Al is hanging in, I returned the call from another friend, David who lives in White Rocks Utah with Lori.  He said he could catch a ride with someone making a business trip to Ukiah, just north of here, and could be dropped off in Fairfield Thursday.

The plan is David will get a motel Thursday night, and ride back to Volcano with us on Friday, spend the night, and be picked up Saturday to go back to Utah.  We feel honored he would go to such difficulty for such a short visit, but we’ll enjoy his company.  He’s one of the good ole good ones.

David is a retired River Rat, having spent a career in rubber boats as a guide on the rivers in Utah.  If you read the blog when we were visiting Utah in July, you might remember meeting David & Lori when we had lunch at their home in White Rocks.

As it turned out, we were able to get David a room at the base hotel.  A large, clean room for $60.